Hulme described literature as either
“romantic” or “classic.”
The romantic writer is at fault because of his assumption that
the human mind can approach a reality beyond the concrete
things of the external world. The romantic, by talking of soul
and of realities beyond those of the every day, suggests
comprehension in areas where none may exist. Such a mixing
of the known and the unknowable leads to fuzzy thinking and
feeling: Verse to them (the romantics] always means a bringing
in of some of the emotions that are grouped round the word infinite
••• I object to the sloppiness which doesn’t consider that a
poem is a poem unless it is moaning or whining about
something or other.
(Hulme, Speculations, pp. 126-127)

one sample of his Amygist poetry 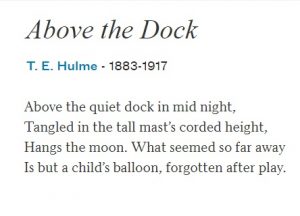