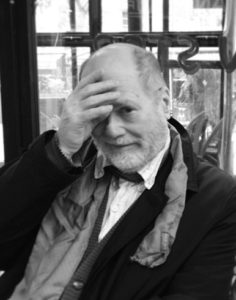 David E. Matthews is an American poet based in Warwick, RI. His works have been published in Unlikely Stories, The Poeming Pigeon, and Open Arts Forum, among others. His most recent book, pffft!, was released on Amazon in late 2021.

I became a huge fan of Eric Blair my freshman year in high school.

First, when this rowdy young cowboy, a friend of a friend, nudged me in study hall, which we chose to spend in the Library, nudged me with a lascivious leer and pointed to his book, I couldn’t imagine what kind of book, but he showed me, by where he pointed. I read:

War is Peace.
Freedom is Slavery.
Ignorance is Strength.

In one book of essays, he writes about his first stirrings as a writer. He would describe the action as if in a book, for practice: “…he entered the room, and turned to look at the encyclopedias…”. Well, once such an ongoing personal self-narrative like that got established, it can’t just be shut off. Soon such a person would see himself differently, refer to himself in the third person, assume an odd pseudonym, like George Orwell.
*
In one of his books Marshall McLuhan wrote about the Fiji islanders. In order to export for sale some indigenous art, the native artists were asked to make crates for the art. It took them as long to make the crates and it did the art. When asked why they said, “We don’t have any art, we do everything the best we can.”
*
For years I’ve been writing anonymous documents, meeting minutes, proposals, incident reports, as the best I could. I will claim this: I might have written something down wrong, or someone might have disagreed with what I have written, but everyone understood what I had written.
*
So now I claim I’m a poet
*
Yes, I claim to be a McLuhanistic Orwellian Poet. I never don’t write Poetry.