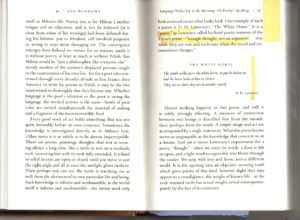 i have to google pensee to get more examples, before i try one.

i have to study how “one thought, not an argument” can produce a poetic moment. I have participated in discussions of one-word-poems, americanized-haiku, imagism, and other efforts grappling towards concision, but i remained comfortably confident that there had to be two ideas to make a poem, at least.

Now i have to wrestle with that idea some more. Maybe ‘thought‘ or ‘idea’  is the wrong ‘thing’ to use in our poetic calculus. There are Two in the poem, the Youth and the White Horse. They look at each other. Two actions that intersect in Silence. The Youth is going to halter the horse. Is that one act or two? or FOUR in all?

Haltering is, or can be, an effusive resonation, with a little anthropomorphization, if you see how i mean.

In a way, it’s may be like parts of a Cormac McCarthy novel, wherein being a horse person enhances your enjoyment & understanding, or maybe like “Stopping by the Woods on a Snowy Evening by Frost”, when the horse-sense of the horse awakes the bemused driver from his reverie.

IMVHO, beforehand , the one-idea-poem is too “easy” — just the documentation of a culture-wide concept, rather than any kind of discovery — we need the jolt, the jarring, the yelp-of-understanding that only comes from friction between two ideas.

indeed, i *think* i want to aim higher than presenting just one poetic feeling at a time. just like real life, which is always in transition from one state to another, the poetic moment is not in the destination but in the journey, if you see how i mean . . . to do that you have to define (or at least intimate) both the origin and the destination, first, then the journey . . . ? . . . .

The Project Gutenberg EBook of Pascal’s Pensées, by Blaise Pascal