The right of fair use is deeply embedded in American law and is codified in Section 107 of the Copyright Act of 1976 (the “Copyright Act”). Congress has provided a set of four factors to be considered when evaluating whether a use of copyrighted material or a work of art is “fair.” In the introduction to the four factors, Section 107 provides that “fair use of a copyrighted work…for purposes such as criticism, comment…teaching, scholarship, or research, is not an infringement of copyright.” Because the analysis is one of weighing factors, bright lines in the area of fair use are rare and judgment and the evaluation of the use of the material are critical to arriving at an appropriate decision. The four factors to be considered are:

When I moved from Texas to Rhode Island, to orient myself, I bought not only books of Rhode Island History, but also Collections of Robert Frost & Emily Dickinson.

We stayed with my daughter while we looked for a house to buy. She is an artist & bee-keeper. She does things for ETSY, in addition to her straight gig, including BEE TEA TOWELS. When 2 of the first three poems I read in Emily Dickinson included Bee Metaphors, I joked to her that she should do a line of Emily Dickinson Bee Tea Towels for ETSY, a sure home-run, I declared.

But I was intrigued. I checked the index in my Johnson Edition of Emily Dickinson, and found only 19 entries for “BEE”, but Poems # 2 & 3 were not mentioned, so I endeavored to excerpt every Bee Metaphor I could find. When we were not house-hunting, I sat in our bedroom over the garage, on my bed, with a window that looked out over the driveway, the bee garden, and the hives – not unlike Emily’s portal, I wondered – and, over the course of six weeks, I read thru the whole volume, keeping tempo with a pen I tapped on the page, highlighting the Bee Metaphors I found, and marking them with little sticky-tabs.

I wound up with 88 poems with Bee Metaphors, with a very few that actually had two Bee metaphors within. But what to do with them? I felt this was valuable information I had gleaned, but I do not have credit as a scholar, much less a Scholar of the Life & Work of Emily Dickinson.

To speak plainly, I believe the only thing I can claim credit for is to be a Failed Poet – a conceit that is not necessarily the egregious redundancy that some might contend – and in that vein I have my admiration

for Emily Dickinson, including her uninhibited devotion to her Little Darlings which other poets would have advised her to Kill: her licentious syntax, her ubiquitous dashes, her devotion to Bee Metaphors.

I mean – and I could be wrong, as I say, I am no scholar – what other writer would employ this same metaphor 88 out 1775 (5%) times? Maybe Mendelsohn (the biologist), or Darwin, or Gregory Mendel, in their Journals – not for publication.

So I thought I would explore each of these Bee Metaphor Citations through the prism of Visual Poetry, and it seemed droll to me to encapsulate the whole effort as a Bee Towel Catalog – my daughter subscribes to several Bee Periodicals, which are awaited by their subscribers as eagerly as those of Burpee’s or Jackson & Perkins, if you see how I mean, but a one-off. . .

I once irritated the publisher of one of my books of Visual Poetry by casually remarking that the book was a Catalog of Art work for sale, posters and wall-sized, potentially. He didn’t like it being trivialized like that. But this is my own, self-published effort, and that is part of it . . . maybe we could say it sets a baseline of expectations?

At any rate, I was going to address the 4 factors of Fair Use.

1) I could have called all of these “after Emily Dickinson . . . “, in the manner of van Gogh, after Millet, or, after Delacrois, but that would have reeked of literary stalking, from the sheer volume of it 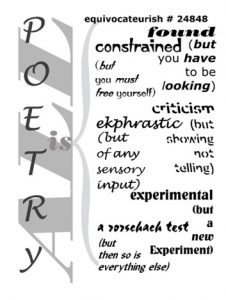 I would say that the service of identifying & excerpting the incidences of Bee Metaphor, as a whole subset of the Dickinson oeuvre, was enough to “add value”, but I have gone further (not too far, one trusts), and rendered these citations as visual poetry, so that not only each not only reflects upon the source material individually, but also that the whole of the visual poetry reflects upon the whole of the excerpted material, and indeed, the whole of Emily Dickinson.

So, this is commentary on the Bee Metaphors of the 88 individual poems, the collected excerpt, and the Dickinson oeuvre ex

pressed as visual poetry, criticism, in that sense, but not parody nor de-canonization nor even critique, really.

2) As with other artists who remained unknown within their lifetime, such as George LaTour, or even Vincent van Gogh, their canonization is so secure now that one can hardly comprehend their desperate anonymity. Over the course of the 9 months spent composing this, my own book, the Universe sent to me other gentle proddings to consider, other non-bee poems, mentions on the internet, tv series, and movies. Some of that is overtly included.

The Meaning of Meaning is a discussion at length, at another time. The Meaning of Emily Dickinson is also beyond my ambition, aside from

acknowledgement of her awesome-ness. The meaning(s) of Emily’s Bee Metaphors might be the outer-limits of my intent. The “seeing” of Emily Dickinson, through the narrow aspect of her Bee Metaphors, through the prism of Visual Poetry.

Visual Poetry as a

vehicle of literary criticism is a beneficially inarticulate mechanism: contrary to popular wisdom, I find clarity to be over-rated.

To use another example, recent to my contemplation, is Frost’s “The Road Not Taken”. We may both say we like and understand it, but the more we talk, the more likely we shall discover that our interpretation is inexactly opposite.

3) I am not a serious person; that is, not a person, a critic, to be taken seriously, since, because, I have selected Bee Metaphors, if you see how I mean . . . A serious scholar or critic would excerpt all the references to Death and then explain clearly how each reference illuminated the grim life of Emily. My guess is that such an exercise would employ much more than 5% of the oeuvre.

I want to provide a non-facetious facet into understanding of the Dickinson Oeuvre, employing the ostensibly innocuous allusions to Bees rendered in my own Visual Poetry style, that should increase & enhance the delight & comprehension of the Dickinson Oeuvre. I think it is a mark of my own cleverness, not to mention the Profundity of Dickinson, to have so attempted, even though success in that way would weaken my defense of Fair Use, if you see how I mean.

4) I wish my work to uplift and direct attention to the Dickinson Oeuvre. In my own estimation, though, I have to say that Emily Dickinson does not need my help. Pause a second to reckon what other mid-19th century authors have such currency, and which of them are so readable, still in this time.

If my help were actually counter-productive, it would not matter, based upon the number of cultural references to her made over the last 9 months, during my composition of this work. Maybe if one were not attuned to Emily, these allusions would pass by unnoticed, but they would still be there in the gestalt.