Australians’ general disinclination toward poetry had created an atmosphere conducive to the hoax. McAuley and Stewart, as well as Harris, reviled the nation’s philistines, whom Stewart and McAuley referred to as “Porlockers,” after the man from Porlock who interrupted Coleridge in the making of his unfinished masterpiece “Kubla Khan.” Harris once delivered a lecture entitled “Surrealism, the Philistines, and You,” and wrote a poem subtitled “Death is Non-Existent, Death is Bourgeois.”16 The Ern Malley “discovery” was exciting partly because of Australia’s perceived lack of culture and stagnancy in its poetry scene. Stewart and McAuley used this anti-philistine sentiment to their advantage, creating the figure of Ethel Malley, whose unsophisticated correspondences and indifference toward her brother’s work bore the mark of the provincialism Harris and the hoaxers despised. Her ignorance made her brother’s ingenuity even more striking, and Harris may have viewed himself as Malley’s literary savior, rescuing the manuscript from its fate in the hands of the ignorant Porlockers.

Do we simply intend those meanings, thereby willing them into existence? And if the human mind does tend to impose its intentions on a text, can any poetry be truly meaningless? If the idea is pushed far enough, poetry becomes a kind of Rorschach test, perhaps (as Michael Heyward suggests) proving Freud’s claim that it’s impossible to talk nonsense.31 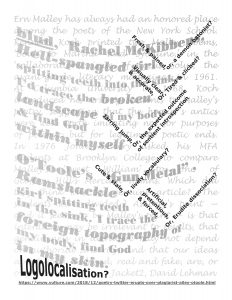 “ern malley”, from Opus in Progressu 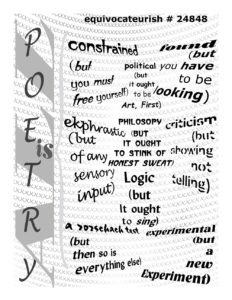